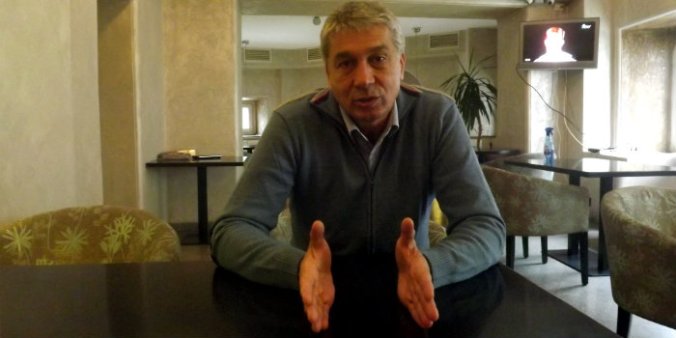 An interview with the organizer of the 15-km long run between the centers of Giurgiu and Rousse – about the Bulgarian-Romanian collaboration in sport, about the culture of running, which is on the rise in Romania and Bulgaria, and about the European spirit of the sport event

Evgeni Ignatov is a Bulgarian athlete and a president of the athlete club ”Dounav” Rousse. He is a golden medal winner at the Alternative Olympic Games in Moscow in 1984 and has success in a lot of running competitions in Western Europe in the 80s (including a silver medal from the European Championship in 3 km distance running in hall in Grenoble in 1981). From 2016 Ignatov is the main force behind the International Free Spirit Run ”Giurgiu-Rousse” – a sport event, which permits each autumn its participants to pass the distance between the centers of Giurgiu and Rousse (15 km). It is organised by the municipalities of both cities and by the two light athletics clubs – ”Dounav” Rousse and „Dunarea” Giurgiu. Every even year the main organizer of the competition is the Bulgarian party, it starts in Giurgiu and ends in Rousse, while every odd year its main organizer is the Romanian party, it starts in Rousse and finishes in Giurgiu. The run passes „The Bridge of Friendship“ between Rousse and Giurgiu.

Mr. Ignatov, on 29 September 2018 the 3rd edition of the International Free Spirit Run ”Giurgiu-Rousse” took place. What is your recapitulation of the event as its organiser and how does it stand in comparison to the previous two editions?

In my view this was the most successful event of all the three that have taken place so far. The organizers – Municipality Rousse and the athletics sport club ”Dunav” from Bulgaria and Municipality Giurgiu and the sport club ”Dunarea” from Romania, have provided the best possible conditions for the competitors. 245 runners from 8 countries have passed the distance of 15 km between the centers of both cities. The best competitors from Bulgaria and Romania were among them. It is very important for me as an organizer that amateurs, who like sports for the sake of pleasure, and not because of awards or results, have participated. We saw in both places in Giurgiu and in Rousse how the participants and the public enjoyed this unique event for our region. This shared joy is the greatest award for us – the organizers.

It was noticable that in spite of the presence of runners from African origin, a lot of Romanians and Bulgarians, inlcuding sportsmen from Rousse, have occupied places with awards. The Romanian Roxana Bîrca has won the first place in the women`s competition, running faster than Kenyan athletes. New records for the distance of 15 km were set. What is the picture of the condition of the athletics in Romania and Bulgaria, which is drawn by the Run „Giurgiu-Rousse“?

There are sportsmen, who have participated in all the three editions. Roxana Bîrca finished 4th in the first edition, took the second place in the 2nd edition and now she won. Two weeks before the start we inivited her. She confirmed her participation, came and won in the competition with strong Kenyan runners. The second place among women was occupied by a Kenyan – Ruth Matebo. This year she won the marathons in Stara Zagora and Varna.

The participation of athletes from Rousse was also very good. Stoyan Vladkov finished 7th. Sava Todorov took the 10th place. The European champion for paraathletes at 1500 m distance for 2018 Hristiyan Stoyanov finished 14th. Milka Mihailova took the first place among women in the category above 40 years.

It can be said that the average level of Romanian runners is superior in some cases to that of their Bulgarian competitors – especially among women. But I think that in general we are equal. Over the course of the years each of the countries takes the upper hand. There is partity among amateurs, too. This year the Romanian runners won the competition in the cathegory for men above the age of 50, but in the same category for women the Bulgarian runners were on the top.

Roxana Bîrca from Romania won the competition among the women (photo: The Free Spirit Run ”Giurgiu-Rousse”)

The event that took place is an idea of yours, but is realised as a Bulgarian-Romanian initiative, in a cooperation of institutions, firms and citizens from Romania and Bulgaria. How was this idea born? How do you evaluate the cooperation between Romanian and Bulgarian partners on this project?

We organized this event together with Anelia Nuneva. As athletes we have participated together with her in a lot of tournaments in Western Europe and America. We wanted to contribute to our city of birth, where the light athletics school traditionally is strong. Accumulating experience through the organization of different events, we gradually reached to the idea for this unique event, which crosses the border between two European states through the Bridge of Friendship situated over the Danube. We wanted to show that the people in our region are free, that we can overcome the borders between us through sports, that we can celebrate our understanding and similarness.

We entered in contact with the municipalities in Rousse and Giurgiu. We needed the support of state institutions, because in this case there a state border is being crossed. The beginning was difficult. But the idea was accepted by our Romanian partners. The mayor of Giurgiu affirmed he would cooperate. We were met with support by the frontier police in both countries. That is how we reached the first edition in 2016.

The run doesn`t take place at an empty space. Rousse is a cradle of the light athletics. A lot of famous sportsmen were formed in Rousse: the Olympic champion Hristo Markov, who has all the possible golden medals in the triple jump, Rostislav Dimitrov – another champion in triple jump, Anelia Nuneva, Nadezhda Georgieva and many other medalists. A very strong track tournament had been taking place here in the 80s. It was called „Youth“ (Mladost). After the track in Rousse was renovated in 2011, we decided to reborn the tournament „Youth“. It has been taking place for six years and affirmed itself in the national and European sports calendar. Competitors from the Balkan countries participate regularly in it. Over 40 young Romanian light athletes have participated in its last edition. The run „Giurgiu-Ruse“ is a development of our experience with the tournament „Youth“.

This run already takes an important place in the European sports calendar and in the national sports calendars of Bulgaria and Romania. It precedes with two weeks the marathons in Bucharest and Sofia. That is how both amateurs and professional runner can prepare and test themselves before the two massive events. About 3000-4000 people participate in the marathon in Sofia. In Bucharest 6000-7000 take part in the marathon…

…Is there a tendency that running becomes more and more popular in Romania and Bulgaria?

In the last years I observe in Bulgaria, what I had previously seen in the 80s in the western countries. People realize that they need to move. Everyone above the age of 30 needs to take care for their health. Running is accessible for everyone. One doesn`t need to make a huge investmnet, neither to have a hall, in order to run. He just needs a sports suit and a desire to run. Events like this international run allow everyone to test what he can do. We saw that there are even people above the age of 70, who beated much younger runners. We want to encourage the healthy lifestyle.

We saw that at the event there was a group of runners from Serbia under the guidance of the former European champion at 3 km distance running in hall Dragan Zdrakovic. There were competitors from Kenya, Great Britain, Austria and other countries. How does the free spirit run places Rousse and Giurgiu on the map of the world as a sport and touristic destination?

We want the run to be known outside the borders of Bulgaria and Romania. It is difficult to make a breakthrough abroad. But I am happy that gradually people understand that this event is well organized. We have been doing it for three years and we do have experience.

Zdravkovich came with a group of Serbian runners. I am glad that my competitor from the 80s showed his respect towards our event. He is very famous in the countries of former Yugoslavia, remained happy and we expect that the next year we will have participants from more countries – including Western Balkans.

We are thinking how a tourist element could be added to the event, so that our cities would be presented to the visitors. Rousse and Giurgiu has things to offer to their guests – as tourist expeirence and as history. It is possible for example – a tour with a ship along the Danube river to be offered to the participants. Maybe they could receive in the future symbolic entrance taxes for the museums and other bonuses, who are derived from their participation in the run. We are thinking on these question and will search for solution, but for sure a lot of foreigners come to our cities for the first time as part of the run. This means possibilities for our cities to find new friends.

Not only Rousse and Giurgiu collaborate in the realisation of this sport event, but also their sport clubs collaborate in light atheltics and other sports. What more should we know about this collaboration?

There has always been sport collaboration between the two cities. When we recovered the tournament ”Youth”, our first participants were the light athletes from Giurgiu. We insisted to invite them and they accepted. I think Rousse has a good sport base taking in mind the free air track. Giurgiu has an excellent hall for light athelticism. That is why in winter we go to train in Giurgiu and we are well accepted there. In summer the light athletes from Giurgiu come to train at our place. Both cities are very close and have a lot of experience in cooperation in all kind of spheres. 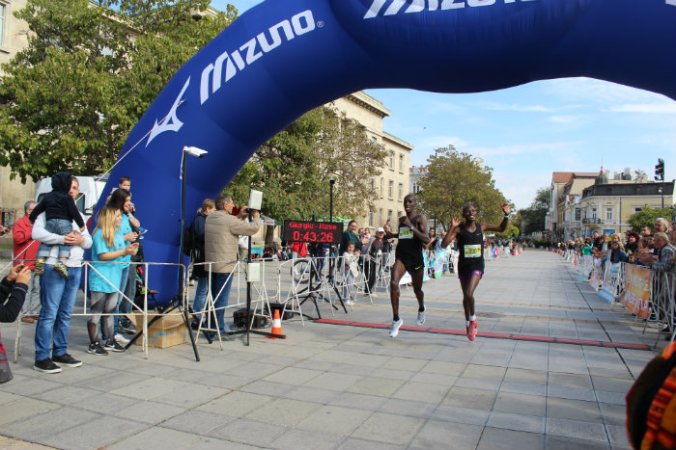 Kenyans Abel Rop and Hilary Kimayo have occupied the first two places in the competition through fotofinish (photo: The Free Spirit Run ”Giurgiu-Rousse”)

What should we expect from the run next year? How do you feel yourself after the end of the third edition of the sport event?

I thank the volunteers from the Youth House and from the sport club ”Dounav” Rousse who participated in this event. These were more than 60 people. They contributed significantly not only to the good organization, but also to the charm of the event. All the competitors, who spoke with me, shared their excellent impression with regard to the organization. This year there was a lottery with 15 awards. I hope that next year we will surprise the participants with something new. I believe there should be a charity cause, which is being realised through the run.

I thank the sponsors, as this massive event would`t have been able to take place without their support. I thank both the muncipalities – organizers, and to the light atheltics federation in Romania and Bulgaria. We do all that for the sport and for the friendship between the two countries. I believe that our run has future.

What is the message of the competition?

Our run is called „Free Spirit Run“. Our message is to have understanding, cooperation and communication between different people. We want people to be friends, to overcome literally and figuratively borders. There were runners, who finished embraced. I think the participants and the public understand this message of ours.