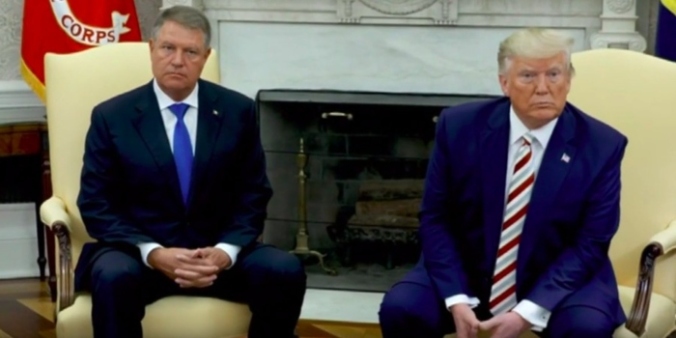 When the Romanian president Klaus Iohannis (left) was in the White House in the summer of 2019, he asked for more American troops in Romania (photo: YouTube)

The euroatlantic candidate got a convenient opponent for the second round of the presidential elections after a campaign, which was likened to selection of a monarch, not of a president

This article was published on 11 November 2019 on the Bulgarian section of the site “The  Barricade”.

Romania heads to new five years of Klaus Iohannis as head of the state. On the first round of the presidential elections after 99,96% of the votes were counted, the representative of the National Liberal Party received 36,65%, while his main opponents received respectively: the former prime minister of the Social Democratic Party Viorica Dăncilă – 23,8%, Dan Barna – the leader of the Union Save Romania, which raced in an alliance with the party of Dacian Cioloş ”Plus” – 13,99% and the actor and former member of the European Parliament Mircea Diaconu – 9,25%. In the next round it is expected that Barna’s voters, the voters of the candidate of the Hungarian minority and the voters of Teodor Paleologu, who was supported by the former president Traian Băsescu, to vote for Iohannis. Dănciă will probably receive a part of the voters of the people who stood behind Mircea Diaconu, but not of all of them. That is how Dăncilă has no chances to win again Iohannis.

These presidential elections were probably the most boring elections in the contemporary Romanian history. There were no scandals, shocking news, confrontations between the candidates. Iohannis and Dăncilă never appeared at an election debate with the other candidates. Iohannis’ team obviously had instructed him that it is sufficient if he simply passes through the campaign without making mistakes. He never appeared in an uncontrolled environment. As Romanian journalists commented – there was a feeling that Romania elects a monarch, not a president.

Iohannis is a convinced euroatlatnicist, and for Romanians as a whole is important to communicate euroatlantic messages. In the week before the elections the French president Emmanuel Macron declared that NATO is becoming “brian dead”, which shook the Romanians and made the expert on foreign policy to affirm that support must be given to the candidate, who can provide strong bond to the White House. Evidently, this is Iohannis. He continues the fight against corruption, opposes the Social Democratic party, and these positions gain him the support of the urban middle class. Its representatives claim that in spite of Iohannis’ unemotional, restrained and boring way of making politics, he doesn’t make them feel ashamed of their head of the state before the Western partners.

The intrigue was who will reach the second round. Dăncilă is criticised for her lack of qualities, but the government of the social democrats in the last years raised the incomes in the state sector, the pensions and ruled in the conditions of great economic growth. This year the pensions were raised by 15%. The next year the will be raised by 40%. The middle net salary in health care and the sector of social care has reached 810 euro, while in the education it amounts to 767 euro. Probably that is why so many people supported Dăncilă, giving sign that they don’t want rule and leaders, who would like to cut the state expenditures through austerity.

The third place remained for Dan Barna – the leader of the party of the young in the Romanian politics – the Union Save Romania. He is considered to be Macron’s preference in Romanian politics in this moments. He based his campaign on technocratic messages – against corruption and clientelism, against the parties and the leaders of transition, in support of the business and the new generations. His party indeed empowers young people, who are often born after 1989. But during the campaign a journalistic investigation, which claimed that Barna has abused European funds, was published. Afterwards the anticorruption prosecution claimed that he is not accused of any wrongdoing in any case. But it got clear, including by words of “heavyweight” analysts that Barna doesn’t represent the national interest of Romania at these elections. Evidently, the interest is that Iohannis win without problems.

Maybe the only thing, which was more interesting in the first round was the great mobilisation of the Romanians from the diaspora. A new record for votes abroad was set – 670 000. More than half of them preferred Iohannis, while a bit over a quarter supported Barna. Such an engagement of the diaspora probably represents desire that the Romanian political system opens more to it and give it greater weight in the political process, now that it votes for the expected winner in the elections. Romanians from abroad traditionally count in the presidential elections. In 2009 the vote in the diaspora gave the advantage to Traian Băsescu before Mircea Geoana, while in 2014 the big queues before the Romanian embassies in Western Europe made a number of Romanians in Romania to vote for Iohannis, because they associated the queues before the voting sections with return to communism.

Iohannis and the urban middle class can relatively calmly wait for the second round, because Dăncilă is the convenient opponent of the Romanian president. On 4 November 2019 the government of the National Liberal Party swore in. The expected victory of Iohannis will allow the ethnic German to rule with a government from his party. But the government is announced as temporal and will hold the power no longer than one year until the next parliamentary elections. Everyone is expecting them with interest, because it is seen that the Social Democratic Party continues to have public support.