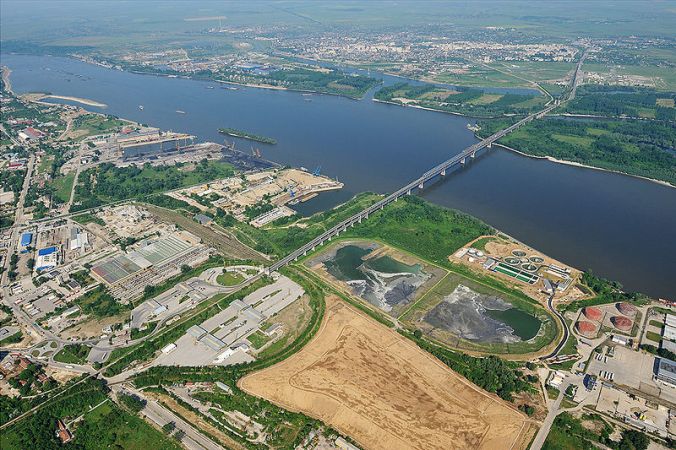 The Bridge of Friendship between Rousse and Giurgiu (photo: Yavor Michev, CC BY-SA 3.0)

The blog ”The Bridge of Friendship” is a project of Vladimir Mitev.

Initial message to the readers

In the time of the Bulgarian revival the young Bulgarians used to become adults as they crossed the Danube and settled to the north of it. True to the tradition, I have been following my searches in Romania for years. I pass The Bridge of Friendship close to Rousse both as a tourist and for work.

I have been working almost seven years as a journalist, which allowed me to interview some of the greatest Romanian intellectuals and experts on political and social questions. In the meantime I learned Romanian language to the extent to interview people in Romanian. I found friens – Romanians, who are ready to support me, without asking for anything in return. And I consider our two people’s rapproachment as a cause.

I realise that Romania and Romanians are unknown for many Bulgarians. The connections Bulgairans have with Serbians, Greeks or Turks seem to be much more developed. Romanians also don’t know a lot about their southern neighbours, apart from the Black sea resorts, where they like to go on vacation in summer, and the winter resort of Bansko.

I would like to contribute to the our two people’s mutual knowledge. I intend to translate interesting interviews and articles from Romanian to Bulgarian and vice versa, to publish original articles an interviews. I hope that with the time the readers from both sides of the Danube will develop their curiosity towards the interesting people and stories of their neighbours on the other bank of the river. I also hope that the duo Romania-Bulgaria will form itself and will accelerate on the highway to modernity.

The name “movafaq” could bring luck – in Perisan it means “success”, “agreement”, “accomplishment”.

The affrmation of a Bulgarian-Romanian blog

More than five years after the blog’s establishment, its message to the reader needs to be updated. The blog has obviously been a success. It has now more than 1000 articles in 9 languages  (English, German, Polish, Italian, Persian, Chinese, Croatian, Romanian, Bulgarian), 150 subscribers on WordPress or through email, more than 1000 followers of its Facebook page. As its editor and founder I have been invited for interviews on Romanian and Bulgarian politics and society by the media in Bulgaria, Romania, Denmark, Great Britain, Poland, Iran. An online and offline community formed around the blog, which includes Bulgarian-Romanian translators, scholars and academic cadres, NGO experts, analysts, journalists and common people that feel empowered by cross-border relations between Bulgarians and Romanians.

Without any doubt, the blog has undergone great transformation from its humble beginning, when it was only bilingual and tended to be something like an archive for my articles. It has developed its own identity, a number of issues of interest, media partnerships (such as the ones with Arena Media in Rousse and The Urban Magazine in Varna, but also the Bulgarian National Radio, Bloomberg TV Bulgaria, The Barricade, etc.) and cooperations with authors and activists in the Bulgarian-Romanan space. It has matured on the basis of critical reflections of the political, social and cultural realities in its two spaces of interest – the Romanian and the Bulgarian one.

It is a blog that provides well-documented and thoughtful analysis on the major political developments in Romania and Bulgaria. It has been promoting the work of Bulgarian literary translators of Romanian literature, as well as the achievements of Romanian theatre and cinema and their cooperation with Bulgairan partners. It has published a number of interviews with and republished articles written by historians from Romania, the Republic of Moldova and Bulgaria on the modern history of Bulgarian-Romanian  political relations. It has been providing socially-engaged articles on issues such as protests, labour unions, incomes, inequality, the fiscal system, etc. The blog has also been promoting the p2p and grassroots activities of various people in the Bulgarian-Romanian space, that can be described as activists for greater human bonds between the two nations. The blog has also discussed what Bulgarian-Romanian business cares about, about infrastructural connections between the two countries and about the problems Bulgarian and Romanian drivers face when driving in the other country.

Having recognised all those achievements (in the line of the Persian magic word “movafaq”, which means simultaneously “success”, “agreement”, “accomplishment”), the year 2021 started for me as the blog’s founder and editor with a pressing need for the blog’s renewal. Over the course of the last almost five and a half years I have learned a lot about the attitudes in the Bulgarian-Romanian space towards people that stand in-between the big national-centric discourses and lobbies. I felt both recognition and suspicion. I enjoyed the friendship and warmth of relations, when cultural and interpersonal borders and restraints have been overcome. I also felt the building of walled spaces and the careful guard against intruders from the outside. I have felt change and resistance to it in Bulgarian-Romanian relations literally through my skin.

I believe the blog is much better known now to the public in the two countries and beyond them. And my guess is that the blog should be more assertive in its journalistic endeavours, messages and communication with the public. The Bulgarian-Romanian mixed community around the blog deserves a higher public profile too. Technologies that have revolutionised media and social networks – such as live streamings, webinars, the visuals, podcasts need to be used by the blog with greater determination and courage. These are some of the general lines along which I am looking for the blog’s development.

Bulgarians-Romanian relations have been plagued by the perceived difference in the cultural and political level of openness towards the Russian-language spaces. Also, the first encounters between the people of the two nations often represent a meeting with the self-sufficiency and abuse of the neighbour.

But I see these and other arguments for resentment between people as excuses and obsolete. I am looking for ways to make Romanians develop emotions towards their neighbours from Bulgaria, instead of treating them with the usual indifference and feeling of superiority, as well as Bulgarian finding sense in opening up to the northern neighbours. My feeling is that there are obsolete and untrue notions and stories that circulate about the neighbours in these two countries. Even if there are objective barriers in contacts, shouldn’t we also have the power and desire to overcome them? The role of the two nations’ states in those relations has also been controversial – with some lobbies in these states being in competition about who is more Western and seeing bilateral relations exclusively as power relations.

A Bulgarian-Romanian common space is being established, in spite of all the resistance, skepticism and disrespect that have been ingrained in these two people’s minds. Time is needed. But the conditions have never been better for the Bulgarian-Romanian relations – with both countries being integrated in NATO and the EU for more than 14 years.

What is necessary is for people to understand that in their neighbour they don’t have an enemy or enemy’s proxy, which is an old-fashioned way of thinking. Our people need to feel empowered, capable of doing and contributing to change in their country and in the region. And cross-border relations could be a way of achieving that.  I would be very happy if Romanians discover the complexity of being a Bulgarian – a Slavic Orthodox nation with the greatest Muslim minority in the EU in terms of procent from the overall population, that is part of Western integrationist circlles. And also, I would be happy if my fellow Bulgarians engage Romanians, even if some of the first encounters might be discouraging. My take is that Romania can offer a lot of discoveries and is understandable to a Bulgarian, as soon as the initial wall of distrust is overcome. Similarly, Bulgaria can be much more interesting and not so “small” and “poor’, if it is looked at with passion, curiosity or imagination.

Update of the mission statement and multiplication of blog bridges

So the mission of the blog “The Bridge of Friendship” remains the same – to promote mutual knowledge, to reflect on the common spaces between Bulgarians and Romanians, to encourage interaction and cooperation. What might have changed over the last 5+ years is that the convictions I had at the start have been hardened by a number of tests, shocks and losses, but also recognition and support.

A large part of the last years has passed for me as part of the cross-border site The Barricade, which is a Polish-Romanian-Bulgarian progressive platform, interested as well in international relations. Two years ago personal and professional hardships led me to the start of a Ph.D. research in Iranian Studies at the University in Sofia in 2020. The first year of this research has finished successfully and one of its results is the establishment of a smaller brother of Bulgarian-Romanian blog, called “The Persian Bridge of Friendship” – a blog that connects Bulgaria, Romania, the Persian-language space and the rest.

That is how bridge building as online and offline activity takes even bolder form, with greater capacity for transformation for every traveller. There are results from this new endeavour – with cooperation being realised with Iranian media such as the Iranian Labour News Agency (ILNA) and Mehr News Agency and interviews on Bulgarian and Romanian politics being given by me to ILNA. The latest accomplishment is my becoming a member of the Centre for Middle Eastern and Mediterranean Studies of the University “Babeş-Bolyai” in Cluj-Napoca, Romania. At present, I am in discussion with Romanian experts on Iran, Afghanistan and the Middle East to write for the “Persian Bridge of Friendship” and the discussions are promising.

All that being said, my expectation is that 2021 will be another year of activity for “The Bridge of Friendship” and another year in which interacting with Romanians and Bulgarians will be helping me overcome wrong lessons previously learned. One of the first men that found sense in my blog used to say that it was an iPod (pod meaning “bridge” in Romanian) in the sense that my initiative is too personal, too individual. I think the blog continues to be shaped by me, but it has been for a long time a window to a number of people and activities that take place in the Bulgarian-Romanian relations. I feel empowered by it and I hope this empowerment is felt by everyone, who has been reading or interacting with it.

The blog appreciates your passing over and over through the Bridge of Friendship. It is a bridge meant to change and transform its passengers, as well as itself through their movement.